For the past several years I have enjoyed doing a "Numbers about Me" activity with my students on the first day that then turns into the cover of their notebook.  I have refined it over time, but last year I made it into a card sort and I think I'll keep it like that this year.  I really enjoy starting the year with a card sort because it is something that I do often in class.

I start with 10 numbers and units that describe me, but I separate the numbers from the units.  They work as a table to try to match them up.  I want around table to table and check their work and tell them how many matches they have correct.  I DO NOT tell them which ones are correct.  This is the golden part of the activity.  I can draw it out as long as I want, or end it as quickly as I need.  I give them time to struggle and then reveal the answers.  My son was in my class last year and his group did not match up all of the numbers.

I then present the answers and give a mint to the students in the group with the most correct answers.  I then turn it to them to create 5 numbers and units that describe them.  They write it on a notecard and turn it in by the end of the day.  They must use a variety of numbers:  percentages, decimals, fractions, negatives, positives, integers, etc.

Our first unit in Algebra is on numbers and units so this ties in really well.  The second day I usually ask them all to have their notebook and they decorate a cover page with their five numbers about them.  It's crazy, but it works!

I often do the card sort part with all my classes, but usually only Algebra does the follow-up part.  By the time my students are in Statistics or Discrete, I've usually taught them before, so fewer time spent on introductions is necessary.

Two Truths and a Lie:

Another thing I did last year that I really enjoyed was for my Discrete Math class after reading the syllabus we did a class version of two truths and a lie based off of the syllabus.  I had each student submit a notecard with two truths and a lie written down.  We went over each as a class and they used mini-whiteboards to give their answers.  I kept score on the board.  It fit well, because our first learning target for Discrete is about propositions, and that's what they had written for me already!

Another activity I've considered doing is chopping up the syllabus and posting it all over the room.  Have groups read a part and then answer one question about that section before they can move on to the next section.  I feel this would engage them better in the "reading the syllabus" process.  I plan to do this in Algebra and Statistics this year, but not on the first day (maybe the second).

I have even considered breaking it up by the name of the course (7 sections for Algebra, 10 for Statistics) and they earn each letter by accurately answering the question.  Then they have to work to collect all the letters.

A teacher move that seems obvious to me now, but I wouldn't have been aware of it my first several moves is that when the group comes to me for a question, I would ask it, give them time to discuss, and then use a random generator to select one of them to answer it for me.  If that student can't, then they'll have to try again with a different question!  (Meaning that I would need to have multiple questions for each section...)

Another thing I introduce at the beginning of the year is Talking Points.  I use talking points throughout the year about weekly for bellwork.  I have some general ones and some unit-specific ones that I use throughout the year with my Algebra students.  However, one day at the beginning of the year (first week), I introduce talking points by having the students teach themselves.  This is all from Elizabeth (aka Cheesemonkeysf).  All of it.  Anything Talking Points is all her.

One thing I want to try this year is this:  Quick Coherence

I tried it at a parenting seminar this summer and watched it help calm down a room of preteen boys, so seems like it's worth a try.  And in terms of creating a culture equitable to students who have experienced trauma, I think this is worthwhile.  Exactly how and when and how much is up for debate still, but likely to do a session at the beginning of each class on the first day!

I'm sure I'll be doing other things at the beginning of the year, but those are the biggies that allow me to flow through the first day of school and a little beyond.

If you want to read more #SundayFunday posts about First Day Plans, then check out I Speak Math after Sunday, Aug. 13!
Posted by Unknown at 1:26 PM No comments:

I am expecting to have four different preps this year.  I am used to having three, so this is causing me some anxiety.  However, I'm trying to stay calm and not allow my job to consume my life.  I'm having some problems balancing my passion for work with my personal life.  My children require a lot of work and attention and so I need my work to not invade that.

I'm hopeful that with #SundayFunday I can do all this and blog some more than I did the past year!  I'm excited to set some goals for this year.  But maybe I should just set goals for first semester because that seems more reasonable.  I also think three goals would be a good starting point.

1.  One performance assessment per unit in Algebra.  I want to assess students in multiple ways, and this is something that I've been working on over the past several years, and I'm close to meeting this goal, so it seems reasonable.  However it is also important to keep it as a goal so that things are in perspective.

2.  Topical use of my prep.  I discussed this on twitter with Shelli @druinok and Casey @cmmteach and there was a blog post by Krisanna at The Teal Paperclip.  I then sat down and looked at my schedule and designed a slide for my school planner.  You can find that slide in this document which contains all the printables I will use. 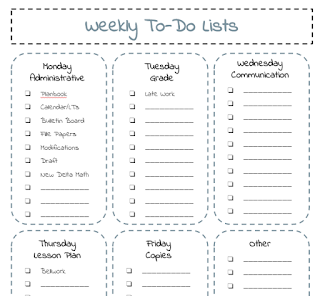 One of the reasons I want to have this as a one semester goal is that I could love it or hate it.  So if I try it for a semester, I should know!

3.  My new prep is Statistics.  So I want to make sure that it doesn't take over everything, but also that we do engaging activities.  So I guess my goal there is that I modify/create something once every section (3-5 chapters).  This could be ANYTHING - notes, activity, card sort, practice problems, journal, etc.  The other part of this goal is to then blog about it.  This will help me #pushsend and demonstrate my imperfections as a teacher.  I am not a superhero teacher, and I don't believe that teachers need to be superheros!

Thanks for Reading!
- Kathryn


If you want to read more #sundayfunday posts about Goals, see Julie's collection at I Speak Math.
Posted by Unknown at 8:38 PM No comments: