Talking Points in my Classroom

After my Group Work Working Group morning session, I knew for sure that I wanted to try Talking Points in my classroom.  After a lengthy twitter conversation I was convinced that I didn't need to do it day 1, but that day 2 or day 3 was okay.  We ended up starting with talking points on day 3.

Here are the instructions I gave to my students: 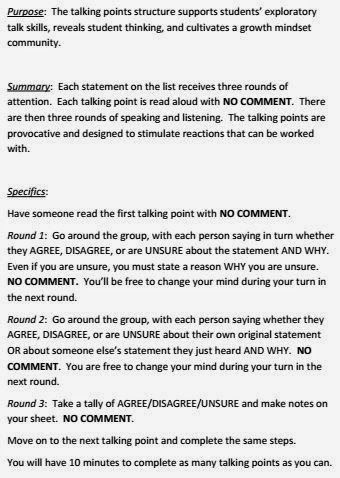 I basically took what Elizabeth shared here (see printable student instruction sheet), and modified it to be only one side.  If you would like my file it is available here (titled structure overview).

We read through this as a class and then I passed out talking about talking and started my timer.  As I walked around I tried to remember that I should NOT be intervening unless they were having trouble with the structure.  Here were my observations:


I pretty much felt like a failure.  I'm really not sure why it my students could get the structure from the handout, but I had to do a lot of intervening.  I tried to wait until the end of a round to really get insight into what the group was doing in order to push them the right direction.  I looked for things groups were doing correctly, too.  And all the way at the end of talking points I shared with the whole class the good things I saw each group doing.  (ie. "I saw table 4 reading the statement out loud.  Thanks table 4!")

I had a thought or two about never doing talking points again, but instead I knew I just needed to push it harder and help students focus better.  I came back the next day ready for more talking points and a little more prepared for how to support my students.  I gave the whole class one structural issue to focus on:  say your becauses, and then went around looking for that as well as the other things.  The next time we did talking points I focused on take turns in rounds.  Then finally three rounds per talking point.  Each time I reminded them of the previous expectations, but added one new thing.  This worked really well for me to focus on the good things that students were doing.

All of my files are in a google folder that you can access here.  If you download the file it will open in word.  Also there are many shared talking points available here.

Did anyone else experience my struggle with talking points?  If so, what have you done?  If not, how did you set your students up for success?